Hey guys!
I remember I left about a year ago. Thing is, I played Wizard101 for so long before, I remember when you needed to run around with no mounts, etc. And it has a little place in my heart. So right now, I am coming back for at least a week. This is nothing permanent but I hope you guys will like it.
Happy Hatching
~Stormcaller
Posted by Kieran Stormcaller at 6:13 AM 2 comments:

I am done.
I am sorry but for me Wizard101 has just gotten top old. I love all the friends I've met and the community. From TFN to Arlen Dawneyes I will remember all of you. But I have turned to new games. Terraria: now on steam for 9.99 USD is an incredibly addictive game. My friend and I have a youtubr gaming channel that we want people to check out. Please. And so with that Goodbye.
-I'm Sorry
_Kieran

Our Channel:  http://www.youtube.com/user/TheDwarfBros
Posted by Kieran Stormcaller at 11:05 AM 3 comments:

I've done nothing to Evil that he didn't ask for personally, so please back down. He doesn't want to be here.

If you wish, I will ban your account too. Just let me know.

See he is abusing his power!! The main thing is this-

STAND UP FOR HIM

JESTER IS ABUSING HIS POWER!! Look at this post from Maniac Magic which I totaly agree with!! Sorry Malord if your are mad at me for copying but this is about Evil Theurgisrt not playguerizm

Chances are, this post will never be published. Chances are, that even if it is published, it will be deleted immediately. Chances are, the people will never read this. Why? Because Jester is abusing his power. Let me direct you to the post that caught my attention....
http://eviltheurgists.blogspot.com/2011/06/in-regards-to-my-ban-on-wizard101.html
There, The Evil Theurgist says....
"So in case you did not know I was just recently banned from Wizard101 Central do to the fact that I removed the Reagent maps from Central. The maps were made by me so therefore I would have every right to remove them. The reason behind this is that 1. it is a lot harder to upload and maintain the maps through Central, which is one of the reasons I was so discouraged to update them in the first place. 2. The maps had not been updated in months. When I approached Jester telling him that I would be removing them I also asked for him to remove all of my gold and thanks accumulated from that thread as the content is no longer there so no need for credit when the thread does not exist. I also said to Jester and I am also going to say to you this is not an act of greed to get views. I also did not proved a link back to my site whatsoever. The ban seems to be permanent and the reason being under "Are you even kidding me, you are going to remove content?" And that's the end of it."

He was banned for removing his work.
Recently, he made another post.
http://eviltheurgists.blogspot.com/2011/06/reagent-mapping-update-and-other-drama.html
There, he says that Jester insulted him, and spread lies, stealing his work and claiming it as his own!
I don't know about you guys, but I think this is horrible.
So go ahead Jester, delete this post, ban me from central. I don't care. I'm done with central. I'm done with you.

Stand up for the evil theurgist! It was wrong that Jester banned him. I urge you all to make similar posts on central if you can. If you want, go ahead and copy and paste this. Jester can not get away with doing stuff like this. That post won't be published because Jester is a horrible dictator. He will cover it up, pretend this never happened, anything to keep his subjects in line. Now go out there and protest.

Spread this everywhere. Post it on Central on your blog every where! Spread the word!!
-Kieran
Posted by Kieran Stormcaller at 11:52 AM 1 comment:

Hello!
If you didn't know already there is a new card pack in the crowns shop! It is called the dragon's hoard and you can get some EPIC stuff. Each pop costs 399 crowns and gives you seven items! They are all dragon related- Dragon Skull housing item- Dragonfruit snack- Snapdragons- etc. There are also two mounts that I know of-
The Epic Bone Dragon which was the first Ultra-Rare Item I got- 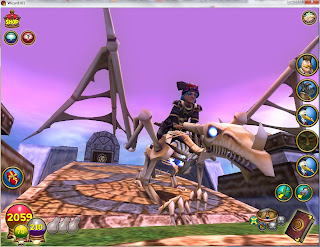 It is literaly like the BIGGEST mount and it has a HUGE wingspan!
There are also dragon wings which are like wing mounts except uber scaly and again- HUGE! 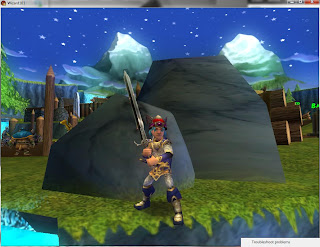 Awesome two handed action straight from Lord of the Rings!! Also I don't know if it is a glitch but if you equip wings while holding the sword it becomes one-handed....
Ehhhh who cares?!
Also when you run you look just like Aragorn! 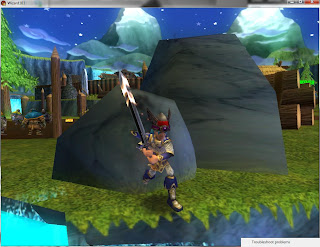 That armor is the armor that's from the set there is a set for each school.
Here is the full life set: 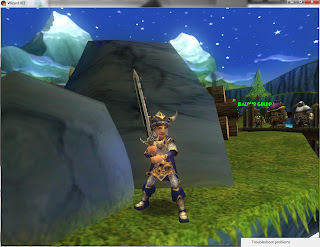 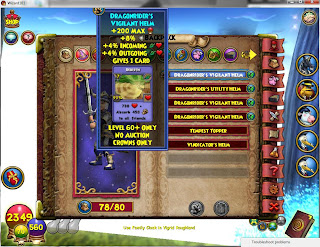 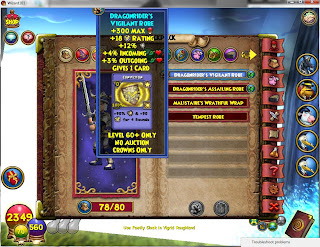 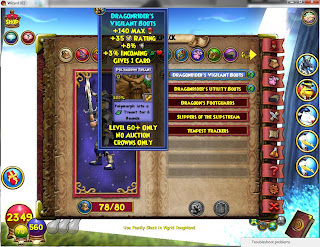 It is really good!
I am guessing there is one for each school...
I have the full life set, boots that give you "10% accuracy for 4 turns" spell
and a robe that gives "Water Elemental Polymorph"
I made a short video showing off some of the stuff (below)
Xfire Link
Yeah also I am going to the raven wood ball as Thor! So Cya there
-HappyHatchinjg
-NIK
Posted by Kieran Stormcaller at 9:23 AM 1 comment:

Here I have a small, long, I dunno post about how Norse, Nordic, whatever you prefer, history ties in with Grizzleheim and Wintertusk!
First of-Names of places

Northgaurd- Nothing I know of probably just comes from guard or fortress in the north.
Savarstaad Pass- Not sure but I think it may come from Svarstad a city in Norway.
Vigrid Roughland- In Norse mythology Vígríðr is the battlefield where the gods will battle as a result of Ragnorak.
Mirkholm Keep- I do not know what this comes from.
Nidavellir- In Norse mythology Nidavellir is one of the nine worlds and the home of the dwarfs.
Jotunheim- In Norse mythology Jotunheim is the home of the Jotuns (yeas there are more) or giant trolls.
Helgrind Warren- Helgrind is the entrance to hel or the underworld.
Winterdeep Warren- I do not know.
Ravenscar- I think Kingsisle thought they made up this one but there are cities in England called Ravenscar
Hrundle Fjord- Hrundle is a word they made up and fjord- ford in Norse, first discovered by Eric the Red when he explored Greenland yadda yadda.
Austriland-Austri means East
Vestriland- Vestri means West
Sudriland- Sudri means South
Nodriland- Nodri means North

Austri,Vestri,Sudri, and Nodri are four dwarfs who represent the compasses points and hold up the dome of the world which is made from the skull of Jotun Ymir.

Bears-- (for all the names I will be doing first names only)
Baldur- Baldur is the Norse god who was killed by mistletoe thrown from his blind brother. 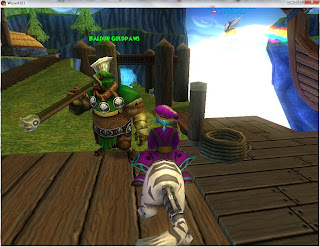 Nick Jonas- Nick Jonas is the Norse god of music and- wait how did this get here?!!! 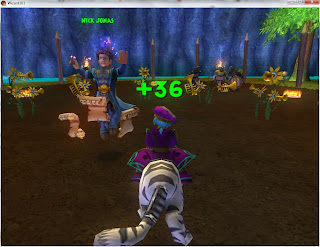 Kojun- Comes more from Chinese than Norse
Dain- In Norse mythology Dain is a dwarf and Daiin is an elf.
Torald- Torald is a German name
Vidar- it is strange for a shopkeeper to have such a sybolizing name but Vidar is the son of Odin and a Jotun and he is said to avenge his father's death by killing the wolf Fenrir at Ragnorak which he is said to survive!
Erik- Erik comes from Norse meaning one or alone. :(
Huskarl- Manservents of household troops.
Eskil- A town in Turkey
Thorlief- A Norse name.
Bjorn- Norse for Bear.
Valgard- I'm sure this is wrong but "a Norse name"
Snorri- Icelandic name.
Haarek- Norwegian name.
Einar- From a Norse word for "undead warriors..." uhhhhhh?
Hagen- The 37th largest city in Germany!
Osric- Anglo-Saxon name
Sigurd- Sigurd or Seigfreid is a legendary hero of Norse mythology who made the sword "Gram"
Orn- something that involves urine....
Egil- A Norse Masculine name

-I will continue this tommorow for now I have to go to Italian lessons so
Happy Hatching
-Kieran
Posted by Kieran Stormcaller at 4:21 PM No comments:

Well I managed to start some of WIntertusk:

I totally love the environments! 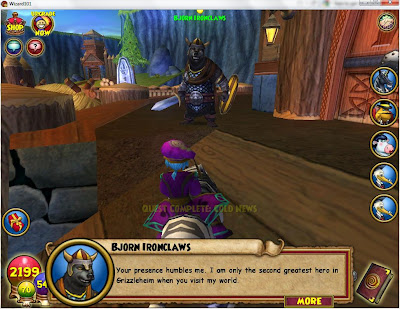 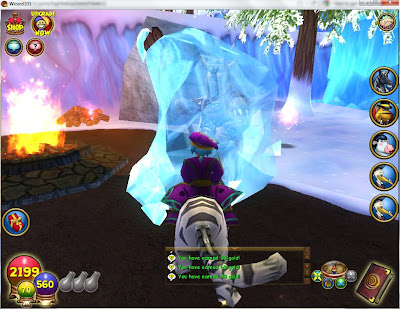 Uhh did somebody have a brainfreeze?

So after investigating some frozen people: 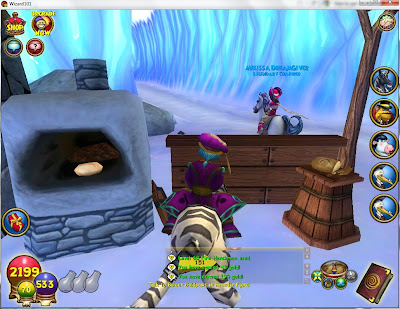 MUST HAVE THAT OVEN AS A FURNITURE ITEM!! 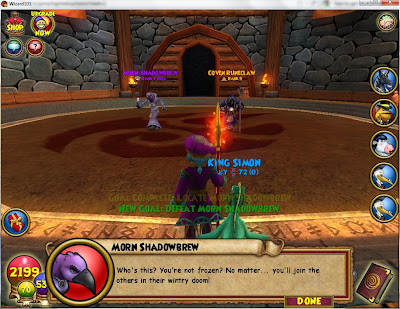 Yeah so next I need to fight some ravens so the white raven will give me a white feather!
Then I can free Granny Raven
Also i might do a Waterworks run sometime i dunno...
Anyway
Hothothothothot-NOT


YEAH!
-Happy Hatching!
Posted by Kieran Stormcaller at 9:49 AM No comments: